Hachinohe Port was opened in 1939. After the designation of Hachinohe City as a New Industrial City in 1964, greater effort was put into the development and improvement of the port and its surrounding areas, resulting in the city growing into one of the most industrialized areas in the Tohoku region. The port celebrated its 80th anniversary in 2019. 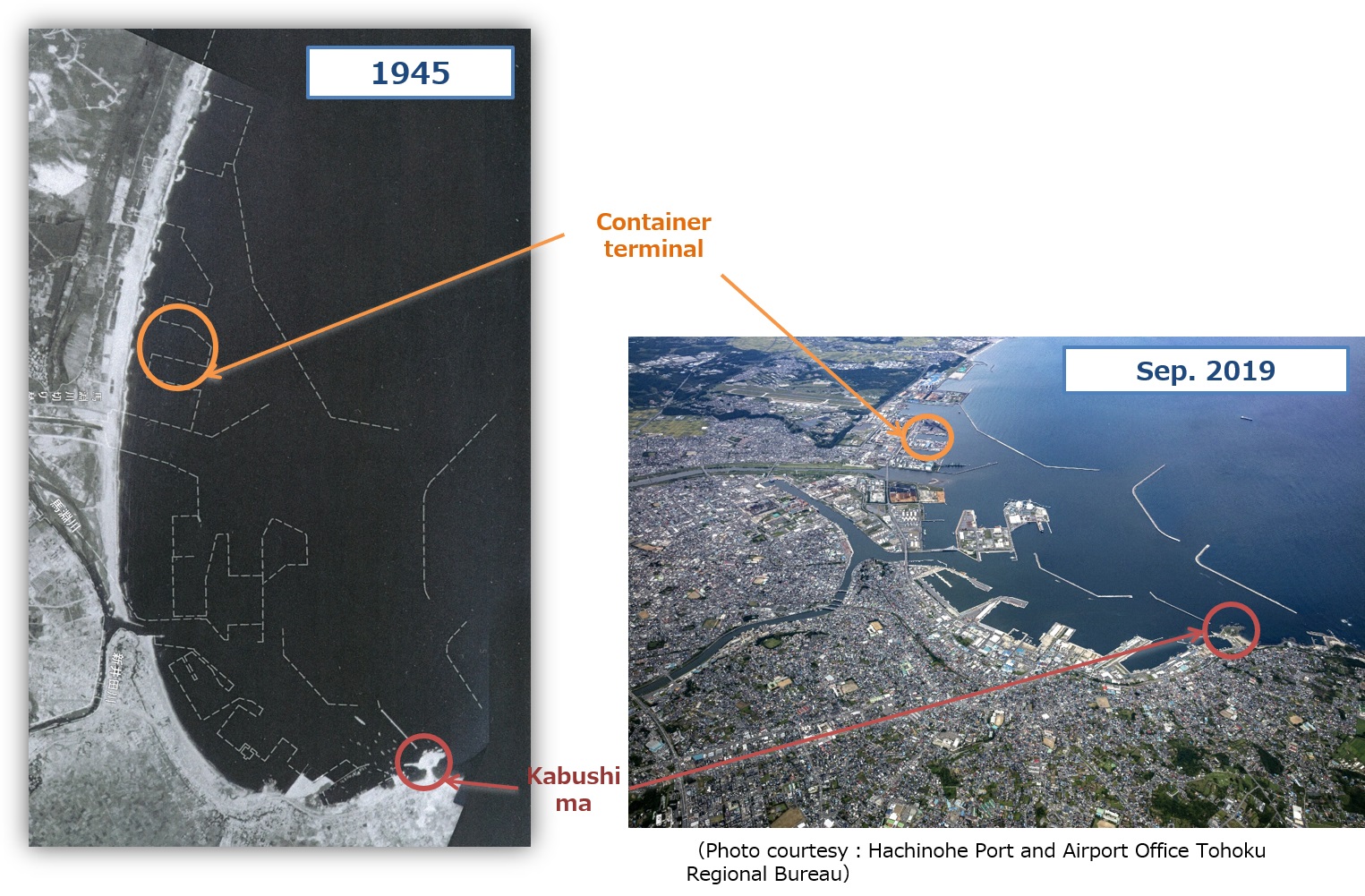 Birth of Hachinohe City and Port

About 350 years ago during Japan’s Edo period, the port in Hachinohe was called “Same Ura” (Shark Bay). At that time, it was used as a fishing and evacuation harbor on the Sanriku Coast. While goods from different ports in the Tohoku and Hokuriku regions had always been transported westwards to Osaka in the past, the establishment of eastern routes resulted in the port being used to transport goods to Edo (now Tokyo). As the maritime shipping industry in Japan began to take off during the Meiji period, ports were actively constructed throughout the country. Work to repair and reinforce the port in Same Ura commenced in 1919, and Hachinohe also accelerated its efforts to promote harbor works.

Sometime later in response to a move by the Home Ministry to designate a larger number of major ports, the local authorities decided that it was important for the port in Same Ura to be upgraded into a commercial port to promote the further development of Hachinohe and that it would be advantageous for Hachinohe to evolve from a group of villages into a large city to achieve this objective. Consequently, Hachinohe City was founded on May 1, 1929, following a series of discussions by four local municipalities (i.e., Same, Minato, Konakano, and Hachinohe) about a possible merger.

In December of the year in which Hachinohe City was founded, the port in Same Ura was merged with the area around the mouth of the Minato River to form a larger port and renamed Hachinohe Port. This port was designated by the Home Ministry in January of the following year, thereby laying the legal framework for the continued upgrading of the port. As the port improvement works steadily progressed, Hachinohe Port was designated a trade port in 1939 and a major port in 1951.

Hachinohe City was bombed in air raids twice in 1945, once in July and once more in August, resulting in the destruction of various plant facilities, Shiriuchi Station, and many other buildings. Furthermore, a coastal defense ship called the Inaki, which was temporarily berthed at Hachinohe Port at that time, was sunk after an intense three-hour battle with US Grumman fighter planes on August 9. The Pacific War, which had a devastating impact on people’s lives, ended one week later on August 15.

Designation as a New Industrial City and rapid growth

Following the designation of Hachinohe City as a New Industrial City in 1964, full-scale port improvement works were undertaken, including the construction of large berths and ferry wharfs, while industries involved in the production of paper, non-ferrous metals, and other key materials were gradually built up in coastal areas. As a result, Hachinohe grew to become one of the most industrialized cities in Tohoku.

In 1996, the port was designated as a foreign access zone (FAZ) and the Hachinohe Port Trade Center was opened. Port Island (Kawaragi Wharf No. 1) entered service the following year in 1997.

Sometime later, the Korea Route (now the China/Korea Route) and the North America Route (suspended in 2008) were established in 1998. After that, inland feeder routes were established to connect Hachinohe Port to Yokohama Port in 1999, to Tokyo Port in 2006, and to Nagoya Port in 2008. Since the establishment of a new Korea Route in 2015, the convenience of the port has continued to be enhanced through initiatives such as the addition of new anchorage sites and an increased range of services.

Expansion of the container yard and reefer container plugs